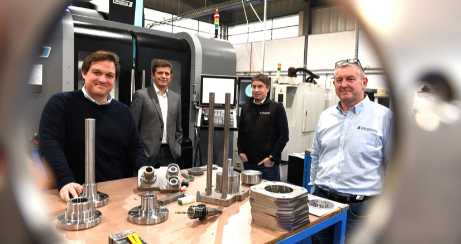 Since taking over in early September, Mike has implemented significant chances to KASL already.  These include formalising our Quality Management System which has seen us achieve the ISO 9001:2015 accreditation, introducing a new Materials Requirement Planning System as well as a rebrand and launch of our Website.  He has also retained the existing staff with Kevin Smith promoted to Operations Manager and Business Development Manager, Paul McQuillan also joining the Team as we target significant growth.

“I looked at several companies that were for sale in this sector but none of them were as attractive as KASL.”

At KASL, without a doubt, the most important investment we make it our people.  Whether it’s in our Management Team or our Engineers, the whole workforce stands together behind our shared mission and common values to make sure each project is managed, undertaken and delivered to the highest possible specification, something that Mike is passionate about and is also being a pivotal part of his future plans.

Clive Owen LLP Corporate Finance Director, David Wilson advised on the acquisition, whilst Martin McKinnell, partner at The Endeavour Partnership also acted for Mike on the legal side.

Mike said; “I looked at several companies that were for sale in this sector but none of them were as attractive as KASL. The company is built on very solid foundations, had a very strong management team in place already and has an excellent reputation for quality and significant repeat ‘word of mouth’ business. I am looking forward to the challenges ahead as we expand the client base of KASL and invest in extending the factory to increase production capacity.”

We are delighted to have Mike on board and look forward to announcing more changes over the coming months.